Tour of the Everglades 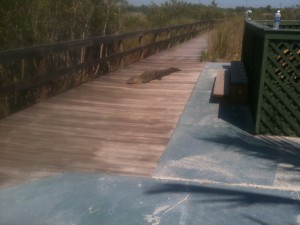 It may surprise you that old Gator Gil can talk a little German, but I’ve picked up a thing or two from all our German friends that start to visit us after the Easter season.

We’ve been watching many of the RVs with their funny license plates head back north this week, but we’ve also seen a few more families from even foreigner places standing around the Tamiami Trail and taking pictures.  We’ve been trying to warn these folks not to get too close to the water, but I reckon my pronunciation of ACHTUNG! is all wrong because they don’t pay me no mind.    I keep pointing out that it’s mating season and gators get awfully single-minded around here and lose their senses, so if you come down here for a visit, stay off the banks!

One cool thing about it being the end of dry season is that tracks are easy to find.  In fact, some of the humans on the airboat rides are seeing bear tracks—and fresh panther tracks!  That’s pretty special.  We used to have a ton of black bear and Florida panther, but their populations are dwindling down in here.   The Florida panther is the only panther in North America, I kid you not!  It’s last habitat is the Florida Everglades, so it is awfully special to see their pawprints in the muck.

We had a bit of a scare last week when Uncle Wader mistook the Easter Bunny for a snack.   The mishap was handled well although I’m worried ol’Wader might get sued.  It was an honest mistake, coulda happened to any gator.   I reckon it’s not real smart, though, a big rabbit like that hopping around the Everglades with baskets of colored eggs and marshmallow chicks.   Oh, well.  He doesn’t need that tail anyway, all it is is decoration as far as I can see.