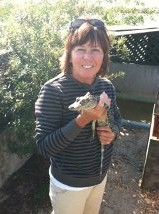 Good afternoon, Adventurers! Gator Gil here from the wilds of the Everglades to let you know what’s been going down in the ecohood for the last couple of days.  Man, it has been FUN! First off, the guys are getting real chatty about their territory, and the folks who’ve been out here have gotten an special treat when Reb down at the swamp buggy ride started bellowing and growling to let everyone know he was moving in to the water hole by the ticket booth.

“Wh-wh-what’s that noise?” one young man from Canada asked.
“Why, that’s a gator!” said guide Marlowe, who pointed to ol’Reb who was on the bank just lettin’ it fly.  She says it sounds like a distant motorbike engine, but I say it sounds like rock’n’roll!  Me, I like to bellow and growl as much as the next gator, but I generally keep it to myself.  I’m kinda shy that way.
What else?  Oh, yeah!  A couple of good ol’girls from Chicago came down and had such a barrel of fun on the airboat ride that they’re already planning their trip for next year.   Both of ‘em jumped right in that gator pen with Kim at Corey Billie’s Airboats and took a-hold of little Gertie and not-so-little Snapper and had their pictures made.
What does a gator feel like?, you ask.  Well, those ladies said they were soft and squishy, whatever that means.  Some folks is real surprised that gators aren’t dry and scaly—no sir!—we are very particular about our skin, and man do we ever work hard to stay at the right temperature.  Some lady last week said Gertie felt like a salami.  I don’t know if that’s a helpful description or not…it sure wasn’t for me. Well, our guides Gator D and Marlowe have both been seeing of lot of my gator friends sunning and basking out during the wildlife drive  as well as tons of different birds during the Full Day Adventure.
Til next time!